Actress Clea DuVall’s most recent project is a real killer. In the Lifetime thriller Lizzie Borden Took an Ax, she stars as Emma Borden, the older sister to the infamous Lizzie played by Christina Ricci. For those unfamiliar with the story, if that’s even possible, in 1892 Lizzie Borden was tried and acquitted of the brutal ax murders of her father and stepmother in one of the most outrageous trials of all time. It’s been over a century since the gruesome crime occurred, and yet media and historians alike are still hypothesizing if Lizzie really “took” that ax, with some even pointing the finger at sister Emma as being guilty of everything from destroying evidence to actually being the ax-wielding killer herself.

DuVall is no stranger to intense roles, with an extensive film and television pedigree of critically acclaimed nail biting works under her belt, but it’s those kind of complicated characters that speak to her, and we’re happy they do! We recently got the chance to talk with DuVall to discuss what attracts her to the darker characters, her turn as Emma Borden in Lizzie Borden Took an Ax and the possibility of a return to the repertory cast of American Horror Story. Read the interview below to find out more!

The Daily Quirk: What attracted you to the role of Emma Borden?

Clea DuVall: I read the script and thought it was sort of strange and interesting. I like the challenge of humanizing a character in a world that is so infamous, and framing as much humanity and reality to something that has been as fabled as this horrific event. I think it’s so easy to lose sight of the reality of the human being and the families. This is something that really happened to a family and I just thought that was very interesting.

TDQ: Did you have to do a lot of research on the actual Emma before shooting or was everything you needed in the script?

TDQ: Lizzie Borden Took an Ax puts a lot of focus on Emma and her support of Lizzie throughout the ordeal. You give such a nuanced performance, balancing her need to believe in Lizzie with that underlying bit of doubt. Was that difficult to portray?

CD: No, I think we had so much to work with in the script and also I’ve known Christina [Ricci] for a long time. We were really engaged in the each other together as actors and that was really fun. I think all the tools were so readily accessible to make that happen and I’m just really glad to hear that that came across. I haven’t seen the movie yet.

TDQ: It’s a dark story, with a shocker of an ending, which we won’t spoil here, so what was it like filming? Was it as dark on set as the movie itself?

CD: No, we had a lot of fun. We had a great crew. We had a Canadian crew and they were all so wonderful and Nick [Gomez] was great. Christina [Ricci] and I had fun. The other actors were really good. You know when you’re making a movie, we shot it in a month which was so ambitious for what it was, and when you are making a movie like that you kind of can’t really take it too seriously or everyone will lose their minds. So, that was all really fun. But, I wasn’t there on the days they shot the murders, so that’s been, from what I’ve heard, a very intense process.

TDQ: Emma and Lizzie’s relationship is a pivotal aspect of the movie. Can you tell us a bit about what it was like filming with Christina Ricci?

CD: Well, like I said, we’ve known each other for a really long time and we really have an affinity for each other so it was a very supportive experience. For me, as an actor, it was the kind of chemistry that you don’t really have with everybody. That was a really rewarding experience doing that because it’s such a rarity.

TDQ: What do you think really happened that day in Fall River?

CD: I think she killed her father and stepmother. Beyond that I don’t know, but I think she did it.

TDQ: What is it about stories like Lizzie’s that make them so memorable and intriguing, in your opinion?

CD: You know it’s something that we’re still fascinated by-  why we still look at the O.J. Simpson case or Casey Anthony,  where it’s very clear that it is highly likely that there are people that do that.  And the idea that you can get away with murder. I think people are fascinated by it, and it’s just, I don’t know, I think we all have that little part in us that want to see if we can get away with it. And it’s crazy when someone can and it’s so obvious that all the signs are there that they definitely did that and yet there’s that ‘beyond shadow of a doubt’ that lets some people slip through the cracks.

TDQ: This isn’t the first time in your prolific career that you’ve taken on a role in a dark project, having starred in films and shows like Girl Interrupted, Zodiac, Carnivàle and American Horror Story. Are you drawn to these types of projects or do they seem to find you? 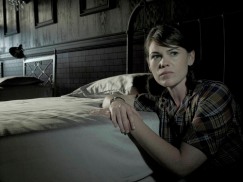 TDQ: Speaking of American Horror Story: Asylum, is there any chance you’ll be back to take on another role in a future season?

TDQ: Well, we like to end our interviews here at The Daily Quirk with a fun question, and the soundtrack for Lizzie Borden Took an Ax, given how unexpected it is, made us wonder what artist or song would you pick for your own personal soundtrack?

The Daily Quirk would like to thank Clea DuVall for taking the time to chat with us! To find out more about Lizzie Borden Took an Ax, visit the film’s Official Site and tune in for the premiere on Lifetime Jan 25 8/7c!

One thought on “Clea DuVall talks ‘Lizzie Borden Took an Ax,’ ‘AHS’ and much more in an exclusive interview!”