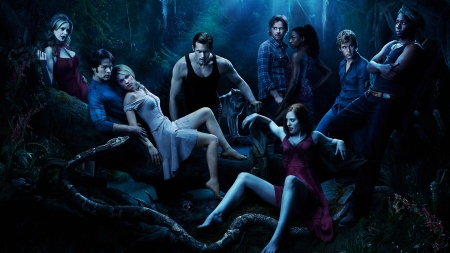 Season 5 of True Blood premieres this Sunday so I figured it’s the perfect time to share the reasons I am obsessed with this crazy fun vampire show!

1. Charlaine Harris’ Sookie Stackhouse/Southern Vampire Series books are my favorite guilty pleasure books. All the crazy women going nuts over Fifty Shades of Grey should pick up Dead Until Dark or Dead to the World and enjoy a good story along with their steam. I went through the first few books in the series in a matter of days and then impatiently waited for each new one to come out in May. When I found out the series was being made into a show, I was pretty much obsessed before the first episode ever aired. 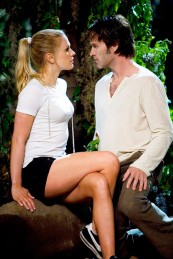 2. I like shows that make me feel like I am up to no good and question, “should I be watching this?” The first season of True Blood definitely had that “I would change the channel if someone walked in” appeal and it made for an extremely fun watch. Although seasons two and three seemed to lose a little bit of that feel, it made a bit of a comeback in season four and I cannot wait to see what season five brings.

3. I am a fan of the whole vampire genre, but True Blood is much more than a vampire show (and not just because it’s also a werewolf, witch, shape-shifter, fairy show too). True Blood is, depending on the scene and episode, a dark comedy, mystery, horror flick, love story. I especially like the mix of horror and dark humor. A good scare is always fun and True Blood provides them sparsely enough that when they occur you actually do get a fright. The show can be hilarious at times as well, sometimes intentionally sometimes not, but it makes for a good time.

4. Ok, so I am also a bit of a sucker for a love story, especially those that keep you guessing (as opposed to “love triangles” where it’s obvious the third person is a third wheel). Through mysteries, murders, and supernatural events, the love life of Sookie Stackhouse is always the focal point of the show, and oh what a love life it is! Poor Sookie has more suitors of the supernatural variety than you could possibly imagine each bringing their own particular brand of baggage and drama into her life.

There is the whole “what kind of life would I have with a vampire?” drama (because she likes being human very much and intends to stay breathing), as well as a wide range of other relationship woes such as “did my boss that I kissed that one time just turn into a dog?” and “did my boyfriend just eat my fairy godmother?” to keep us guessing who Sookie will wind up with in the end.

5. Alexander Skarsgard. For anyone who has read the sookie books, it is hard to deny that he makes a rather excellent Eric Northman, one of the most attractive and complicated fictional characters I know I have ever read about. I could stop there, but it would be doing the rest of the cast injustice. There is no shortage of pretty people in various states of undress on True Blood, and for that Alan Ball, we thank you.