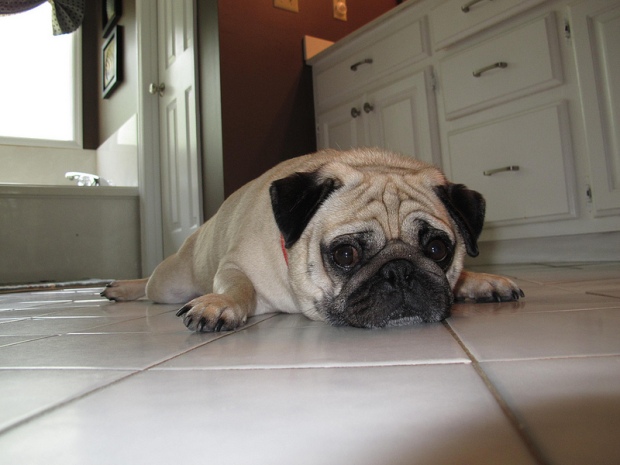 Separation anxiety, one of the hardest obstacles for a dog, and their humans to adjust to living with or overcome. I think a lot of the time, there are little signs, so insignificant in the beginning stages of a pups life in a home, that they can be overlooked. The crazy greeting when you come back inside after stepping out to get the mail for 5 minutes is just oh so cute! The jumping like a pogo stick, frantic whining and vocalizing. My pooch really loves me! Until one day, that has turned into wide spread panic while you are gone, and not only do you come home to your velcro dog, but your home may look like a someone let loose a few animals from the circus. While this is a serious issue, and I urge people to not overlook it, and do what they can to help their pets, and themselves, so one does not have to resort to giving up their pet, I will be sharing a few incidents that we can now laugh about after having lived with an anxiety ridden dog. It’s been 14.5 years. We deserve to laugh,…a little. And he was nice enough to share with me his most memorable moments for all of you. 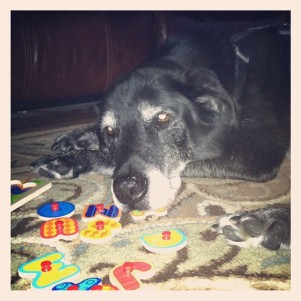 Beau relaxes with a puzzle

Hi, my name is Beau, and I have separation anxiety.

I was adopted from the North Shore Animal League by my dad, when he was a teenager. He wanted to make my mom feel better,(who was his girlfriend at the time), who’s family dog had died young and suddenly 2 weeks before Valentine’s Day. I was great, slept in the car the whole way home. Quiet, (probably a little too quiet) seemingly well behaved. I wasn’t exactly well received by the adults in my new families, who had no clue I was about to enter their lives.

Because of bad behaviors, that were mostly just puppy/uncorrected behaviors, but that people weren’t ready for, I stayed at my mom’s house, then my dad’s house, then mom’s. Then, I may have been really bad so off to daddy’s new house. Finally, after I had some destructive tendencies, (my humans were still dating, finishing high school and entering college age years) I permanently went to my mom’s house. (Fortunately “Grandma and Grandpa” really really love my mommy) I say all of this, because I think all of that back and forth, structure and then lack of structure, really took it’s toll on my lil personality. Mama dukes started working for a veterinarian, so she was going to help me cope. Who knew it would just take so long, or some days require a little yellow sleepy pill?

Before any of you ask why I wasn’t crated, I broke 4 of them over the years. Gorilla Tough cages – no match for me. It was safer for me to not be that closely confined.

Baked goods – Ok seriously, this stuff is delicious. Homemade, store bought, who cares! Give me some. I was taught to be polite and not bother anyone while they eat. I would even leave someones full plate of food alone if they went to answer the doorbell. “Leave it and Stay”, and I was a statue. Now, this one time, my Grandma had to run to the store for a few minutes. Left me in the kitchen, behind a baby gate. Based on what she found when she arrived back home, it seems as though I got the gate down, jumped onto a window sill, shoving my head (or used my teeth) through the blinds and watched her walking away. I then also ripped said blinds off of the windows. Then, I smelled it! The sweet aroma of a bag of Milano cookies and a few Nestle Crunch bars. I needed a cozy place to eat these, so I took all of the blankets and sheets off of a bed, curled underneath them and ate away. Mommy and I were both in trouble that day. I won’t get into how many cupcakes and garbage bags I got into as well over the years. It’s a miracle I was never severely ill. 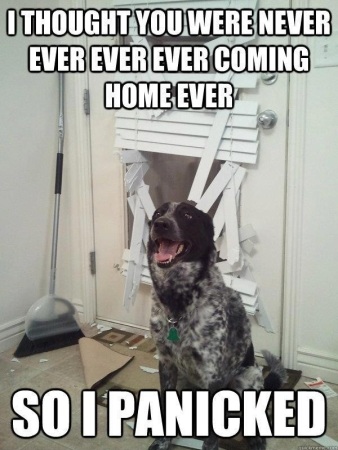 Crates – OK so I was not, and still aren’t a fan. Ideally, crates are supposed to be great I hear, as long as they are used correctly, never use one to punish us, because what do you expect us to do, enjoy a place thats supposed to be for safety when we are being yelled at and banished from the rest of the family in it? Well after someone put me in one a few times incorrectly, the damage was done. You’d think after I demolished the door of the first one and got out my people would figure things out. But thats when we went from a vari-kennel of heavy duty plastic to those gorilla tough metal ones I mentioned before. Adios!! An anxiety ridden dog gets super duper amazing canine strength. Forget the toys and items mom put in there to keep me busy. Sure it worked for a little while each time. One of the final times I was in one was when Mom and Dad moved into their 1st apartment. I didn’t escape the cage, but I shattered the tray inside, destroyed the blanket in with me, as well as dug into their brand new plush carpet of their bedroom, that I could reach courtesy of the broken tray. They tried moving the crate out of their room into the hallway, but I finished the crate off, despite all of the hardware added to it, or the various Kong toys and other items to relieve my boredom. They are also left with replacing the linoleum in that area as well where I dug and scraped a nice 4 by 8 inch hole.

Last, but certainly not least, was probably my biggest moment in my older age. 3 years ago when Mom and Dad tied the knot, they vacationed in Maui. I had my (moms) family live with me in my house. All went very well the whole first week. Then they took me to their house for the weekend, when I came back on Monday, I think I got a little confused. Mom’s truck was there but no Mom or Dad yet. What were these people thinking leaving me for so long?!? So, I panicked. A little. No, it was a lot. I removed a solid wooden door off of its hinges. I chewed about a foot or 2 of old fashioned molding off of that doorway. I pulled several feet of carpeting away from a wall, wooden tacking and all without so much as getting a splinter. When Mom’s parents came home after work to care for me, were they in for a surprise, as were my newly betrothed parentals when they got home the next day. 2 weeks later you guys both got home from work, and I remember I ripped pillows apart, and when Dad came to let me out of your room, the feathers were still falling. I was also rocking out to Thunderstruck by AC/DC. I also knew you guys weren’t that mad, because you were both doubled over with laughter at my musical choice. (That’s a story for another day) Or was it tears?….. Ah who cares, there is something to be said for being the worlds, or at least NJ’s worst best dog.