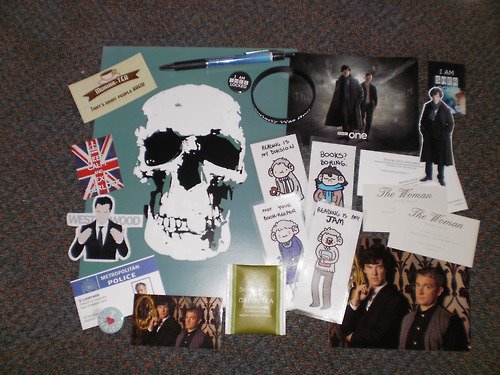 To say that the reinvented Sherlock series, starring Benedict Cumberbatch and Martin Freeman, has taken the world by storm is an understatement. Fans around the world are waiting with bated breath for series three and filling the Sherlock void by planning meet-ups and conventions in the meantime! An ambitious Sherlock fan in Australia named Rebekah decided she would plan Melbourne’s first Sherlock Convention and was kind enough to share with us a bit about what inspired her to do so and how it went!

Read on for the interview!

Q: Please tell the readers a little about yourself.
A: I’m a 3rd year teaching student, and as well as Sherlock, I also get obsessed about Terry Pratchett, Diana Wynne Jones and Doctor Who.

Q: When did you first become interested in Sherlock?
A: I had seen lots of things about it in various places, which roused my interest, so I decided to get a hold of it, and haven’t looked back.

Q: Which episode has been your favorite so far?
A: I really love all of them so much for different reasons, but if I had to pick I think I’d go with A Scandal in Belgravia.

Q: Do you have a favorite character from the show?
A: I have an enormous soft spot for Detective Inspector  Dimmock (because I think he is too underappreciated), but I think my most favourite character would have to be DI Lestrade.

Q: Why do you think the show has such a strong appeal to fans?
A: I think it’s the intelligence, the excitement and just the style of the show (it’s so visually appealing as well) to start with (for me anyway) but then once you get into the fandom you are hooked on the vibrant  energy, it’s quite the feeling to be part of a fandom that has such a long history.

Q: What made you want to plan a convention?
A: I had actually seen others who had held them, and they looked like such fun, and a way meet people as enthusiastic (and insane) as myself. And they are so much less likely to happen in Australia that I decided to change that.

Q: What was the most difficult part of planning the convention?
A: Ah, we did have some difficulty with the venue to start with, but I think overall it was trying to plan  for the amount of attendees we would have, making sure we didn’t run short, or have too much excess (which is what ended up happening, which is better than being short! :D)

Q: Were you surprised by the amount of people interested in participating? How about the wide variety of ages?
A: Yes, absolutely! I was initially thinking just a little meet-up, but then it sort of snowballed beyond my expectations. Someone had also asked me about ages as well, and when I ballparked that the average might be 17-27, I discovered that there were a number on either side of this figure.

Q: Please tell us a little about the stalls you had at the convention.
A: We had a couple of very talented artists who brought along postcards and prints to sell, as well as some adorable ID card, stickers and other goodies, and I myself also made up some bookmark, charms, magnets and the like to sell to con- goers.

Q: Please tell us a little about the events you had at the convention.
A: Besides watching the episodes we had a cosplay contest and a fan art contest, a raffle, fan fiction readings, and assorted other small activities, like material to make a black lotus blossom, games of Cluedo and guess who, and a small scavenger activity.

Q: Did a majority of the attendees cosplay for the convention? Who was the most popular character?
A: Yes! There was an amazing array of costumes! Sherlock, of course was very popular, and for a character that has yet to make an appearance in the show, Sebastian Moran was quite well represented. The non-characters too, were just awesome! We had the Pink suitcase, Mycroft’s umbrella and a jar of jam…

Q: What was your favorite event at the convention? Why?
A: More than the specific events themselves I loved people reactions to the events… I was a little puzzled by the collection of people standing up at the back to watch ASiB, until we got to the ‘Vatican Cameos’ section and they all hit the deck, to general applause… I loved seeing the effort going into the costumes and the art, along with equal amounts of frivolity…

Q: What do you think fans enjoy sharing the Sherlock experience at conventions and meetups?
A: I think it’s just the chance to meet other people who feel so passionately about something (read: equally as insane) as they do…

Q: What is it about Sherlock that inspires fans to make their own Sherlock art and fiction?
A: I think it is that there is so much to work with. Beyond the asthetic there are complicated relationships and intriguing possibilities with backstories and other things we aren’t told. And of course, you can take it as seriously or as crackily as you please, and we love both equally as well…

Q: Do you plan on holding future conventions/meetups?
A: There are a group of Sherlockians from Melbourne and around Victoria who meet up semi-regularly, but I myself am not planning anything quite on this scale in the near future.

Q: Do you have any advice for fans who want to set up their own conventions/meetups?
A: Lots and lots of lists. Also don’t be afraid to ask for help. When I was planning ours, FanishMinded of Tumblr (who organised the American one that particularly inspired me) was an invaluable source of help. Also, approach anyone you wish to purchase something from, as they will quite often be happy to help you out. Qwertee.com very generously donated several shirts for the con, when I approached them to see if they had any Sherlock themed ones left over!

3 thoughts on “A Look at Melbourne’s Very First Sherlock Convention!”