Osric Chau has made big waves as Kevin Tran, a high achieving high school student turned Hell’s Most Wanted on the CW’s Supernatural. Since his debut on the show in Season 7, fans have taken a serious liking to both Kevin and the actor behind him. The Daily Quirk caught up with Chau to discuss what’s in store for our favorite prophet, upcoming projects and his new way to keep in touch with fans.

The Daily Quirk: When did you first decide acting was for you?

Osric Chau: After my first big role I couldn’t really see myself doing anything else. I played a Wudang fighting monk in a Spike TV mini-series where I had one of the best times in my life, doing my own stunts and spending a good 3 months in China shooting it. When I got back home to Vancouver I just felt this terrible void and that was pretty much when I knew I didn’t want to do anything else.

TDQ: What attracted you to the role of Kevin in Supernatural?

OC: There were so many awesome things about Kevin. When I first saw the character description, I kinda shrugged it off as being the stereotypical Asian character, but after looking more into it and getting the new scripts it was just so cool how much focus they had on him that allowed the character to grow so much more. Easily one of my favorite roles, if not my favorite, to date.

TDQ: Can you tell us a little bit about what’s in store for Kevin during the second half of Season 8?

OC: A lot of studying to do and a lot more to decipher on this tablet half. On the surface it seems so simple and incomplete but yet, it is still a tome of information, it’s a weird thing. Unfortunately, God doesn’t make things easy to understand, even to the prophet of the lord. Kevin knows that, and he has his eye at the end of that tunnel.

TDQ: How has it been different shooting this season versus Season 7?

OC: Kevin is much less scared in Season 8. In Season 7 I spent most of the time hyperventilating, breathing heavily with my eyes popping out of my skull. This season, Kevin’s been able to take off his training wheels and has even started to explore on his own in this world. It’s been a lot of fun and I’m always super excited to get the new scripts. 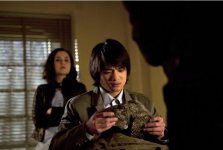 TDQ:Do you think Kevin will ever get to take those all important exams he was studying for before his life was turned upside down?

OC: Well he’s kind of studying for a test right now but no, not those exact same exams from before. Since factoring the Supernatural into his life, Kevin has a new set of priorities and responsibilities and takes them seriously.

TDQ: What has been your favorite moment filming the series thus far?

OC: Between the first scene I ever did running away from Jared and a scene I did in 813. I think I set a record for the number of costume changes ever on the show in one day. I can’t remember how many it was but it was over 20.

TDQ: Why do you think fans of Supernatural have taken such a liking to Kevin?

OC: I think it’s because he’s a person that a lot of people can relate to. For the most part he’s normal, he’s thrown into this supernatural world, he freaks out and then he deals with it. That’s how I and I think most people would want to do it if they were in his position. You’d rather not freak out, but realistically that should happen.

TDQ: This past year you had two films come out, Fun Size and Man with the Iron Fists, what’s next for you?

OC: One of my favorite things to do is do independent films. I’m developing a few scripts, feature length and tv pilots, and my roommate and I will start prepping to do our first feature film soon. Both excited and terrified of that.

TDQ: How do you like to spend your time when you’re not busy acting?

OC: Learning new skills. A few months ago I started skating, that lead to Hockey. I started learning the guitar two weeks ago. I took my first fencing class yesterday. I’m polishing/prepping 3 short films with different writers and directors. I’m producing a very addictive and competitive game that’s a throwback to the simplicity of the old 8 bit style of gameplay, but feeling new at the same time. And I’m reading a ton of scripts. I spend my time trying to stay busy, that’s a big hobby.

OC: Cartoons. I’m a sucker for cartoons. South Park and Futurama are my two favorites. Great social commentary and satire, very clever writing. Game of Thrones, Breaking bad, Community, Parks and Rec have each taken up sizeable chunks of my time recently. And movies, all sorts, wish I made more time to watch more.

TDQ: What is the most played song on your iPod?

OC: It’s “The Fighter” by Gym Class Heroes played 196 times. When I write I’ll let my playlist play till a song that fits the tone that I’m writing comes up, then I put it on repeat till I’m done. By the end I can ignore the lyrics, which reminds me, I need to get more soundtrack music.

OC: The fans are easily my favorite things about Supernatural and they’re always in the back of my mind in terms of thinking of things I can do to reach out and thank them. So I started doing these Skype sessions with fans every Sunday. I’ll tweet out, add KevinTranAP on Skype right before and people just start calling in and I just pick up the caller on top. This one girl I spoke to, I won’t say names, but she knows who she is and I’m sure a ton of people will know too because the fandom is so tight (another thing I absolutely love about it), but we were talking for a few minutes when I see the door behind her crack open. She then screams out at the top of her lungs “MOM, NOT RIGHT NOW, I’M TALKING TO A FAMOUS PERSON!!!!!” in that amazing voice that we’ve probably experienced at some point, and I just couldn’t stop myself from laughing. NOW, what I should have said and I will say now is that you should respect your mom. She’s an amazing person, she brought you into this world and she loves you more than life itself. I would not be a lot of things if it weren’t for my mom and I need to thank you more often for that.

OC: The Sunday Skype sessions is one of those things I wish I started doing earlier. It’s a great way for me to get to know the show a bit better and the people behind its success on the other side. I’ll definitely keep doing it and hopefully get around to meeting as many fans as I can. I think on the Sunday after my next episode airs, I’ll do a live stream with everyone and answer a ton of questions so I can get to more than just one person at a time. Also, if you have any ideas/suggestions/comments/requests or anything, tweet it out to me, I’m not on it all the time but I do eventually scroll through it and some of the best and funniest things I’ve ever heard are from the fans. Thank you for that.

A huge thank you to Osric Chau for taking the time to talk with us! Catch Supernatural Wednesdays at 9 p.m. on The CW.

2 thoughts on “An Interview with Supernatural’s Osric Chau”