The most highly anticipated and hotly debated role in the Divergent movie franchise has finally been cast! After months worth of speculation, messages tweeted and deleted, and multiple screen tests, the film has finally found its leading man. Ladies and gentleman, meet the big screen version of Tobias “Four” Eaton, actor Theo James! 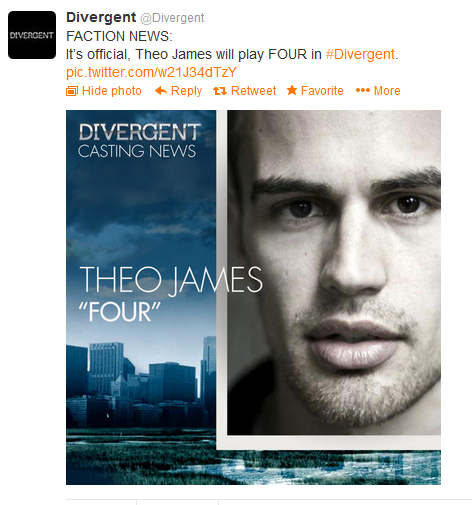 Theo James is best known for his roles in Underworld: Awakening and The Inbetweeners Movie. He also stars in the British supernatural television series Bedlam. James’ casting is a bit of a surprise, as his name was not on the shortlist of actors previously reported to be favorites for the role of Four. You can learn more about James on his IMDB page. 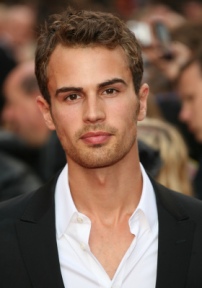 In the Divergent book series, the main character Tris Prior, to be played by Shailene Woodley, is first introduced to Tobias Eaton by his nickname “Four,” after joining the Dauntless Faction and arriving at their compound. Four is an instructor who immediately appears to take a special interest in Tris, initially making her suspicious of his motives (a theme that carries throughout the books). As a relationship begins to form between the two, a series of events begins to unravel causing them to fight for their lives as well as their love for each other.

Four’s physical appearance is described in great detail in the books and has been confirmed by author Veronica Roth, leaving fans a lot to pick apart about the choice of James for the role. The character of Four is described as being biracial, but with a lighter skin tone. He’s tall with dark brown hair and deep set dark blue eyes and unconventionally handsome, with a “strong jaw, distinct chin, spare upper lip,” and hooked nose. Keep in mind no character makes it from book to screen without changes, and more emphasis is always put on the actor’s ability to embody the character than to be an exact match of the physical description. We’ll have to wait an see what Ms. Roth thinks of Theo James for the role if an when she chooses to share her thoughts.

In the mean time, we would love to hear what you think of  Theo James as the choice for the Divergent movie’s Tobias “Four” Eaton. Share your thoughts in the comments!