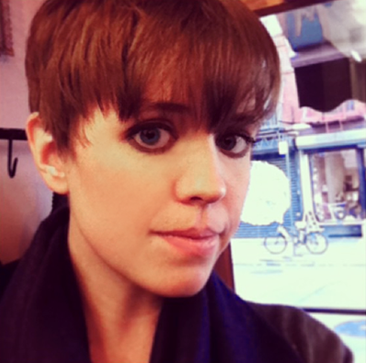 Cara McGee is an artist of many talents. Comic art, tea blending, and social media prowess all fall under the realm of things Cara has added her own talented and unique spin on in the past few years. An alumni of the prestigious SCAD Atlanta, Cara is an excellent example of a modern day artist making her work accessible to the public through social media in a fun and engaging fashion (without it feeling like one big ad campaign). In fact, Cara comes across as genuinely humbled by her skyrocketing success and is extremely dedicated to her fan base, which is tens of thousands strong on Tumblr alone. It’s her appreciation of her fans and her willingness to connect and interact with them, both within the social media context and in the real world, that sets her apart in the newly rising field of  the “Tumblr Famous” and caught our interest here at The Daily Quirk… well, that and the tea.

Cara’s signature tea blends on Adagio, a site for creating and purchasing ecologically responsible premium tea blends, are among the site’s best selling signature blends and have garnered her the nickname “the tea lady.” Inspired mainly by comics, books, and television, Cara has blends that appeal to every tea taste and many fandoms (including Sherlock, Doctor Who, Sailor Moon, and The Hunger Games just to name a few), all of which she’s actually a fan of herself. Even if you’re not a big tea person, when you get a look at the custom labels Cara draws for each blend, you may be tempted to buy some just for the art!

I was lucky enough to catch up with Cara McGee between conventions to talk art, tea, and Tumblr for The Daily Quirk. Read on for the interview!

The Daily Quirk: What made you want to become an artist?

Cara McGee: An artist, my goodness, possibly watching a lot of Disney movies or shows like Sailor Moon. I had a habit of like my parents would buy me a Disney coloring book and I would sit and trace all the art from them and try to draw just like that and once I got into high school I kept going with it and ended up going to art school.

TDQ: How would you describe your artistic style?

CM: My artistic style is very heavily influenced by Manga and Anime cause that’s what I grew up reading all through middle school and high school and that’s what I wanted to do. I actually had taken a trip to Japan when I was about 20 and just was so blown away by that whole culture that I came back to the states and immediately applied to go to SCAD and study comics there. Then once I got to SCAD, I kind of branched away from so much Magna ironically and started reading and looking at more American influences, but I think since then my style has definitely balanced out to be more or less Anime and Manga saturated and more and more of a balance of western and Magna influences.

TDQ: What would be your dream art career?

CM: Oh gosh, dream art career… it’s hard to say. I guess just writing and drawing my own comics for as often as I can or if I had to work with a writer I would like to work with somebody like Neil Damon that would be amazing

TDQ: That would be amazing.

TDQ: Can you tell us a little bit about how you first got involved with making tea blends on Adagio?

CM: Sure, sure I had actually been a customer on Adagio for a couple of years before I started blending my own tea just because they were such a cool company. They would send out free tea samples and stuff a lot so they really had originally introduced me to branching out away from the tea that you would buy at (a supermarket like) Kroger and stuff like that. And so I think on Tumblr I had actually seen this graphic that somebody had designed of like a Moriar-tea logo and I thought it was really cute. I thought I could make a tea that was based on that sort of idea of Moriar-tea. So, I got on Adagio and just kind of threw one together and designed a label for it and then I was like that was a lot of fun and pretty easy so then I did a few other Sherlock characters. Those I just absolutely just made up off the top of my head cause I was guessing what I thought might taste good and I posted them on Tumblr along with the art that I did for them and it just kinda took off. Everybody really was interested and I don’t think that that anybody had ever really seen that form of fandom expression I guess. 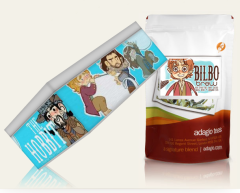 TDQ: The label art really is wonderful. I would buy some of your tea just for labels!

CM: That is something I do try to put a lot of effort into because I figure it’s obviously not the cheapest tea to buy fandom wise at $10 (USD) a bag. It is a little bit of an investment so I do try to make the label art kind of unique and special.

TDQ: Were you surprised by the response your blends received?

CM: Oh incredibly, I was not prepared for it at all I thought it would just be kind of a cute thing that me and my friends would like and when I posted them I had a little under a thousand followers on Tumblr and then um once the posts got going then Adagio realized that some people were buying and they sponsored a giveaway on my blog and I ended up getting like ten thousand followers in a matter of like days because of the tea and the giveaways it was just incredible it was really bizarre.

TDQ: Almost all your teas are inspired by fandoms. If you have to name your top five favorite fandoms, what would they be?

CM: My top five fandoms not just my the teas? Ok, top five fandoms… definitely Sherlock, The Hobbit or R.R. Tolkien in general I guess, The Avengers- I love the Avengers, Cabin Pressure which is a tiny fandom but it’s really adorable and oh my goodness Doctor Who.

TDQ: If you had to choose a favorite among your blends, what would it be?

CM: I think right now I would have to say the Bilbo tea is probably my favorite. 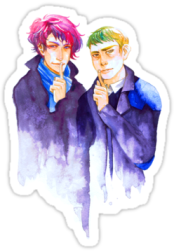 TDQ: Does it change with your tastes or it that an all time favorite?

CM: It changes a lot. The Lestrade tea was definitely my one of favorites for awhile and I’ll go back to the Loki a lot during the summer because it’s a good ice tea. I don’t think I have gone through an entire bag of any one of them because I have so many in my apartment now, but lately I think I have finished a bag of the Bilbo tea. I need to order more.

TDQ: There’s actually a time when you need to order more tea?

TDQ: Let’s take a moment and talk about your Tumblr blog, which has developed a huge following. What’s it like knowing so many people want to read your thoughts?

CM: It’s very bizarre and I try not to think about it too much because despite of all of the followers I try to keep my blog kind of a personal blog and so I talk about my day and my feelings more or less even though if I think about it’s basically like getting up and standing in a giant auditorium of people, with the numbers, but I try to stay personal and friendly on there and not worry about it too much. But now I’ll got to a convention and people ask me about something that happened in my life like a week or two ago and I’m like “How did you even know about that?” and then I’m like oh ok, that’s right I wrote about it.

TDQ: Speaking of conventions, you recently started tabling with your tea and art. What’s that been like?

CM: Tabling is fun. I’ve been tabling at convention, gosh probably since I was fourteen or fifteen, doing a lot of anime Cons just doing little prints and looking back on it now I’m like oh silly Cara. Silly fifteen year-old Cara. But it’s definitely changed because at the SCAD I started doing more comic book conventions, which is a little bit more difficult, it’s a completely different audience than anime and manga conventions. Usually I’m just that one girl that’s sitting there with obviously anime style art and the comic book guys aren’t really quite sure what to make of me, but now that the teas have really taken off and people are actually coming to cons and excited to see me and get some of the tea, some of these guys I see regularly at comic shows that are bigger names in the comic book industry are looking at me like “What are you doing now that’s different?” and I’m like “I don’t know? Tea?” It’s great. It’s very great.

TDQ: Do you have any upcoming conventions or projects you can share with our readers?

CM: Not too much right now. I’m really excited because Adagio just started selling their sampler packs of tea, which I know people have been wanting for a long time, but I was only selling them at conventions because they were kind of a pain to put together and ship out, so that’s pretty cool. Now anybody can get little sample packs of tea from Adagio.

As far as personal projects, nothing is really concrete right now. I’m just trying to do more conventions over the summer and selling more art. I’m going to try to go to London this fall and throw another tea party, I throw all of these big fandom tea parties, and I’m going to try to do one in London this fall. I’ve tentatively been talking to a publisher about a comic, but I’m not sure what’s going to happen with that yet so I don’t want to jinx myself!

The Daily Quirk would like to thank Cara McGee for taking the time to chat with us about her tea and art (and for putting up with Ashley totally fangirling on her over the phone)! For info more on Cara and her work you can follow her on Tumblr, check out her art for sale on Red Bubble, or scoop up some of her tea blends over at Adagio.