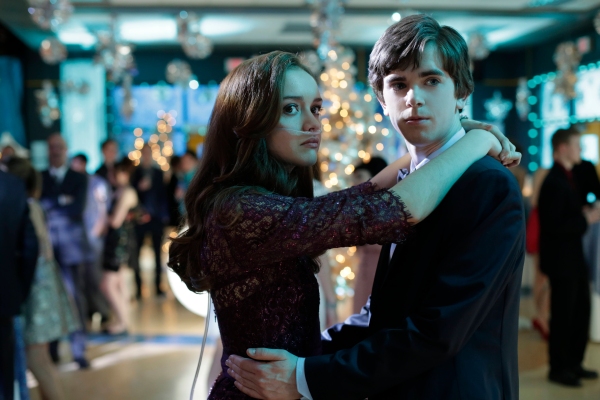 Norma is freaked about Abernathy threatening her with a gun and ordering her to bring $150,000 to the docks at midnight.  She bursts into the Sheriff’s office and tells Romero who promises to take care of it.  Norma doesn’t feel any better about the situation so she asks Dylan to get her a gun.  He refuses.  Meanwhile, Romero retrieves this $150,000 from his secret hiding spot.

Emma and Norman decide to go to a school dance together in their own awkward way.

Norma loses her cool outside the dry cleaner when a fellow resident bumps into her and rudely responds.  This outburst leads her to show up at Norman’s therapist’s office and asks for a session.  During the therapy session we learn that her family background is at best questionable.  The minute she started thinking about her childhood, she got a weird look on her face, claimed to be sick to her stomach, and exited the office.

Norman catches Ms. Watson on the screaming on the phone with someone we can only guess is her ex.  After she hangs up, Norman surprises her by asking if she’s okay.  She worries that he heard too much and asks him to keep what he heard a secret.  When he agrees, she hugs him rather inappropriately.  Can you say?  Mary Kay LeTourneau!!!

Sheriff Romero confronts Keith’s sister who did the books for the Asian sex slave business.  Abernathy gave her a busted face to emphasize his desire for the lost money.  Romero finds out that Abernathy was running the same business out of three ports down the coastline.

When Norma and Emma see each other after school at the Motel, Emma tells her that her and Norman are going to a dance that night.  When Emma asks Norma to hold the dress up she bought for the dance and it accidentally lifts the hem of Norma’s dress and she reveals a nasty scar on her thigh.  She claims that she got it by spilling hot chocolate on her leg when she was a kid.  Unlikely.  When Norma exits, Dylan finds her outside the motel and gives her a revolver.  He decides to teach her to shoot and takes her out to shoot bottles.  Turns out Norma isn’t the worst shot in the world.

Norma is visited by Keith Summer’s sister who warns her that if she has the money and doesn’t give it up, Abernathy is sure to kill her.  Norma is definitely spooked.

Bradley visits the Bates house and asks to see Dylan which doesn’t go over well with Norman.  Dylan had brought her the things from her dad’s desk.  As Norman listens to Dylan and Bradley kind of flirting in the other room, he begins to boil with rage.  Uh oh!  As Norman gets ready for his dance he starts to lose his nut by wigging out about black socks.  When Dylan rationally lends Norman black socks, they have a confrontation about Bradley.  Norman has a less than rational response to his brother’s justification for his involvement with Bradley.  Dylan better watch out!

While Norma and Norman wait for Emma to pick him up for the dance, Norma decides to reveal all her dark family secrets.  She says that her brother forced her to have sex with him until he moved out.  She said that her family was poor and her dad was violent, so she never told anyone what happened to her.  She explains that the scar on her leg was from a hot iron that fell on it after her dad almost caught her brother and her having sex.  This doesn’t exactly help Norman loosen up to have a good time at the dance.  This woman’s never ending manipulation is astounding.

After the kid’s leave for the dance, Abernathy calls Norma to ensure she doesn’t forget their appointment at midnight.  While Emma and Norman are at the dance Norma is packing up her gun and preparing for a fight.  Way to go Bates Motel, you chose an awesome song for the slow dance scene (“Lady in Red” – Chris de Burgh).  During the song, Emma confronts him about his obsession with Bradley and takes off.  Bradley’s boyfriend then confronts him for the same reason and punches him in the face.  As he walks home from the dance Ms. Watson comes upon him and offers him a ride.  She sees his black eye and offers to fix him up at her place.

When Norma shows up to the docks she finds Abernathy and Romero having an interesting interaction.  Romero asserts his power as the Sheriff of White Pine Bay and offers his partnership with Abernathy.  When the mysterious man agrees and attempts to take the moneybag from Romero, the Sheriff shoots him and throws the bag of money into the bay declaring, “not in my town.”  After this, he immediately acknowledges Norma’s presence behind the crab pots and she shoots up from hiding.  It was pretty comical.

Back at Ms. Watson’s house, she cleans up Norman’s wounds then intentionally undresses in his sight line.  As Norman gets worked up, he hallucinates Norma who tells him how wrong Ms. Watson is for seducing him and states, “you know what you have to do.”  Next thing we know, he’s running home.  Oh crap, I wonder what happened to the teacher.  Norma nearly runs over Norman as he approaches their home, when he tells her what happened, she declares everything a-okay.  They decide to go inside, clean up, and build a fire. 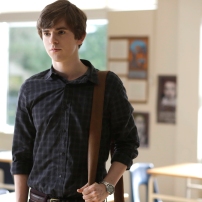 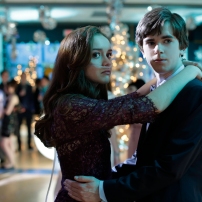