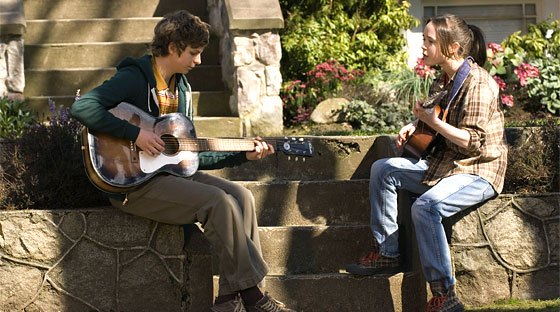 “Decode” by Paramore from the Twilight soundtrack

I am a fan of vampires and werewolves (I’m both Team Edward and Team Jacob) so movies that feature them are right up my alley. This song definitely reflects Edward Cullen and Bella Swan’s complicated, but romantic relationship. I’ve been a fan of Paramore for many years so I was very excited that they were able to have a song on this amazing soundtrack.

I loved The Hunger Games trilogy books so I was very excited that they were being made into movies.  Now everybody knows how much I love Taylor  Swift, so you can just imagine my reaction when I found out she would have two songs on the soundtrack. I pretty much flipped out, but in a good way of course.  I had never listened to The Civil Wars before and fell in love with them listening to this song.

“New Perspective” by Panic! At The Disco from the Jennifer’s Body soundtrack

I’ve been a fan of P!ATD since my high school days.  I actually bought the soundtrack for this movie just because P!ATD had a song on it and didn’t watch the movie until a few months later. Adam Brody (aka Seth Cohen from The OC), Megan Fox, and Amanda Seyfried star in this comedy thriller that’s actually pretty good.

My girl Taylor had a small role in this movie and had a song on the soundtrack.  Yes, I saw the movie. Yes, I downloaded this song. Yes, I’ve listened to it a million times. It’s a really cute romantic movie with many A-lister actors and actresses and worth a watch.

This has to be the most romantic song ever! I love it so much.  It definitely describes the love that Edward and Bella have for each other.  Christina Perri is a fantastic singer and there is a Part 2 of this song that I love just as much.

Juno is one of my favorite movies.  Ellen Page and Michael Cera are just so cute.  Plus I love that they have a song together on the soundtrack.  I never knew either one could sing. It was a nice surprise to find out that they can.

In the last five years, I’ve become a country princess.  I can listen to country music on repeat for days on end.  This movie was awesome, but very sad.  Garrett Hedlund and Leighton Meester blew me away with their performances. I never knew either one could sing and this song is one of my favorites from the movie.

“Painting Flowers” by All Time Low from the Almost Alice soundtrack

I wasn’t a big fan of this movie, but I sure loved the soundtrack.  Especially since one of my favorite bands, All Time Low, has a song on it.  I listen to this soundtrack on repeat a lot.

When I was 10 years old, Titanic came out in theaters. It was the first movie that turned me into a hopeless romantic and caused me to develop my first crush, Leonardo DiCaprio. This song became my ten year old anthem. I listened to it constantly and would sing it at the top of my lungs.

“Bring It (Snakes on a Plane)” by Cobra Starship featuring William Beckett (The Academy Is), Travis McCoy (Gym Class Heroes), and Maja Ivarrson (The Sounds) from the Snakes on a Plane soundtrack

I’ve actually never seen this movie (I’m not the biggest fan of horror movies),  but it is because of this song, I became a fan of Cobra Starship, The Academy Is, and Gym Class Heroes. It’s a fun song to dance around to!

One thought on “The 10 Best Songs from Movie Soundtracks of the Last Two Decades!”