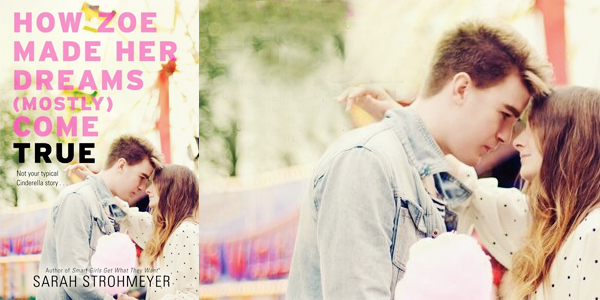 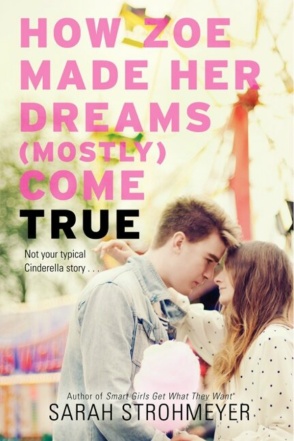 Sometimes, especially this time of year, you just want to read something light-hearted and fun. Something that makes you smile, doesn’t make you think too hard, but still has enough heart and substance to make you feel like it’s worth your while. It can be surprisingly challenging to find this type of book, which is why I’m excited to share with you a perfect breezy summer read: Sarah Strohmeyer’s How Zoe Made Her Dreams (Mostly) Come True.

Zoe is very loosely based on Cinderella, so it only makes sense that the story takes place at a Disney World-type theme park called Fairyland. Zoe and her cousin Jess receive summer internships at the theme park along with dozens of other high school students, and most of them are there not just for the experience, but for the $25,000 scholarship awarded to the most notable intern at the end of the summer. While most of the interns are cast into character roles throughout the park (Jess, for example, is Red Riding Hood), Zoe finds herself assigned as “lady-in-waiting,” AKA “24/7 personal assistant” to the queen of Fairyland. Of course she’s not really a queen, she’s just a demanding boss who happens to play the queen in the Fairyland parade, but she is definitely modeled on the Disney evil queen trope.

Zoe desperately wants to win the scholarship to pay off medical bills from her mother, who died of cancer. And if she can’t have it, she wants Jess to win it so she can afford to go to college despite her parents’ emerging financial problems. The thing is, everyone wants that scholarship, and things at Fairyland begin to spiral out of control as the various interns plot and scheme to win it. Zoe doesn’t really know who to trust, especially when it comes to Ian and Dash, two princes who both seem to be vying for Zoe’s affection, but does one or both of them have an ulterior motive?

While the book touches on a pretty tough issue in regard to Zoe moving on after her mother’s death, it really is a very minor part of the story. For the most part this book is just good fun – sort of a farcical mystery with a little romance and a lot of wit. Strohmeyer isn’t afraid to write smart characters and I loved how even in this relatively light book, she didn’t dumb down Zoe one bit, but she also doesn’t call attention to the fact that Zoe is supposed to be smart. It’s just the way it is – this is a smart teenage girl narrating the book, she’s not defined by this or ashamed of this, she’s not pretentious or overly type-A – she just is, and I really enjoyed that.

Another shining character in Zoe is the queen, who basically dictates Zoe’s life with her various needs and demands. Even though she is incredibly difficult and often condescending or rude, there’s something likable about the queen. She takes her job very seriously and she wants Fairyland to be the best it can be. You feel like maybe, just maybe, her heart is in the right place even if she does have absurd and ridiculous expectations for a group of teenage interns. She wasn’t just pure evil; she had some dimension that made her more enjoyable to read about.

While the plot wasn’t necessarily super complex, I did enjoy the mystery element, especially toward the end as Zoe is trying to figure out who she can trust and who’s doing what to try to win their way to the scholarship. In fact, at the end I got kind of confused about who was “good” and who wasn’t – it all starts to make sense eventually, but for a couple pages I was just kind of rolling with it without totally understanding it. Perhaps that’s intentional; or perhaps it was a minor organizational issue; either way it was easy for me to overlook since the resolution made sense by the end of the book.

And this book has another bonus for anyone who’s fond of theme parks – the Fairyland setting is unique and provides the perfect opportunity to put these kids in a bubble and see what happens. It’s obvious that Strohmeyer has a fondness for these types of parks herself, as she managed to present Fairyland as a truly magical place despite all the drama. I did feel like the world of Fairyland felt very small, not the expansive amusement park it presumably is if it employees dozens of summer interns.  I would have liked to have gotten a larger scope in terms of the park itself, but readers who aren’t as much as a theme park enthusiast as I am might not have that problem at all.

I read through Zoe very quickly and I really enjoyed being able to read a light, fun book that still had intelligence and an engaging plot and well-developed characters. It’s not hard to find a superficial YA romance that doesn’t really make you think too much or feel too much. But it is rare to come across a book like Zoe that keeps things light without compromising quality and originality. That, combined with its summertime setting and theme park antics, makes it perfect for reading by the pool or en route to your own summer vacation.