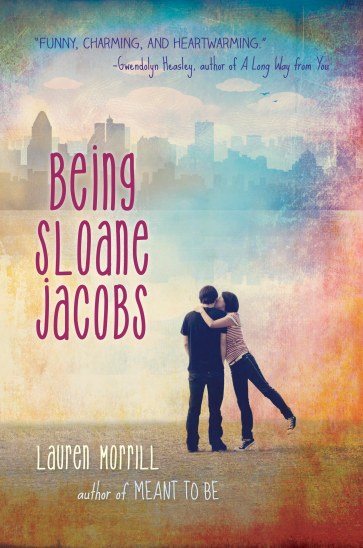 I really loved Lauren Morrill’s debut novel, Meant to Be, and was excited to check out her newest book, Being Sloane Jacobs. In a lot of ways, Being Sloane Jacobs is quite ambitious for a YA contemporary novel. It takes a lot of familiar tropes – you’ll recognize some Parent Trap/Freaky Friday elements, and if you’re like me and totally obsess over the 1992 hockey-player-becomes-pairs-figure-skater movie The Cutting Edge, you’ll notice some crossover from that as well.

Here’s the deal: we have two main characters; both are teenage girls named Sloane Jacobs. Sloane Emily is a figure skater from Washington DC. Sloane Devon is a hockey player from Philadelphia. Both are sent to their respective sport’s summer camps in Montreal, and by chance they run into each other and decide to switch places. Both girls are struggling with family issues and neither is particularly thrilled with the idea of being themselves, so they figure becoming someone else for the summer is the perfect solution. Yes, it’s a little extreme and a lot far-fetched, but it sets up a lovely coming-of-age story for both Sloanes.

Sloane Emily, who is wealthy, girly, and put-together, heads off to hockey camp and learns how to stand up for herself while Sloane Devon traders her sweats and bad attitude for a leotard and some humility. The story is told from the alternating perspectives of each girl, and Morrill did a fantastic job of differentiating their voices, and an equally fantastic job of growing her characters as the story progresses. You really see an ongoing shift in each character’s attitude as they learn to fit in to their new surroundings.

I will admit that I sometimes struggled with just how easy it seemed to be for Sloane Emily to play hockey and Sloane Devon to learn to figure skate. Yes, they both involve skating, but a few weeks doesn’t seem like enough to turn a hockey player into a figure skater doing jumps, spins and lifts and to turn a figure skater into a college-scouted goal-scoring hockey player. But that’s just part of the suspension of disbelief that’s required for this kind of story, and I did my best to shelf my skepticism since Morrill seemed to be doing her best to illustrate how each Sloane was challenged by her new sport. I also appreciated that Morrill seemed to have done her research – I don’t know much about hockey, but I do have some figure skating knowledge and could tell that Morrill had done her homework.

Being Sloane Jacobs also involves a bit of a romantic element for each girl, although that’s so secondary it almost doesn’t matter, especially in the case of Sloane Devon. I liked that Morrill didn’t focus the story that direction, because the bigger picture was about each Sloane facing their problems and learning to move past them, not about whether or not they were able to find a boyfriend at summer camp. In fact, I would almost go so far as to say I could have lived without the boys entirely, except they did play some important roles in plot progression , moving things forward more organically than they might have otherwise.

The back-and-forth perspectives of the chapters make it pretty easy to keep reading – alternating between the girls keeps each side of the story moving along at a pretty quick clip. This wasn’t a book that I couldn’t wait to pick up, but once I did pick it up I’d get sucked in pretty quickly. There isn’t anything particularly unpredictable about Being Sloane Jacobs, but as far as YA contemporary novels go, it’s a quick, reasonably light read that’s well-executed and features characters with dimension and charisma. That’s a combination of qualities that can be surprisingly hard to find in YA, which is why I would absolutely recommend it to fans of contemporary YA who are interested in checking out a promising new author. I’m excited to see what Morrill has up her sleeve for her next book!