While my home state may be best known from popular TV shows such as The Simpsons and Portlandia, there is much more to Oregon than hipsters, breweries, and Voodoo Doughnuts. Though Oregon wouldn’t necessarily come to most people’s minds when searching for a perfect vacation spot, there are a countless number of reasons why it should. While I could write a very lengthy article on how we “Keep Portland Weird,” I’m going to showcase some of the state’s best highlights both in and outside of the big city so you can really get a feel for everything Oregon has to offer.

What better way to immerse yourself in the City of Roses than by exploring the International Rose Test Garden located in Portland, OR? Founded in 1917, it is the oldest continuously operated garden of its kind in the United States, and the garden currently contains over 7,000 rose plants of approximately 550 varieties. What’s a rose test garden, you ask? It’s actually exactly what it sounds like; the garden serves as a testing ground for breeding new rose varieties. Roses grown in the test garden are evaluated on fourteen different characteristics including color, form, foliage, and fragrance – pretty much all of the characteristics consumers look for in a garden plant. Whether you’re looking for a fun spot for a picnic, a photo-shoot, or even a wedding, Portland’s International Rose Test Garden has you covered.

After walking through the Rose Garden for hours, you’re bound to be starving. Do yourself a favor and try out one of the more than 500 (Yes – Five. Hundred.) food carts scattered throughout Portland! Most of these carts are organized into what are known to locals as “Pods,” which are large groupings of carts featuring a wide variety of cuisines. Food carts are a perfect way to grab a bite to eat while exploring the city because you can easily take your food with you wherever you go, and you don’t have to plan your adventures around finding places to eat because they are literally everywhere. Food carts in Portland are just like Starbucks – there’s one (or twenty) on every corner. If you’re usually a pretty indecisive person, you have been warned.

Also known simply as the “Blue Pool” due to its natural and vibrant topaz color, Tamolitch Pool is like a little slice of tropical paradise in the Pacific Northwest. The pool is located on the upper stretches of the McKenzie River, and it is only about an hour and a half northeast of Eugene, OR, making it a popular destination for collegiate adventure-seekers. One of the coolest parts about Tamolitch is that it was formed due to volcanic activity, which shaped the distinct pool as a separate entity from the river. The pool is very, very cold so it’s not ideal for swimming, but the hike to get there is well worth the venture if only for the sight of the crystal clear water (although the surrounding forests and trails are pretty breathtaking on their own as well). Though the clearness of the water makes it seem like the pool is very shallow, in many spots the pool is over 30 feet deep! 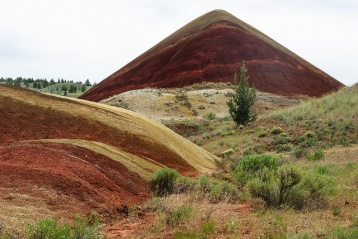 As amazing for science as it is for aesthetics, the Painted Hills are definitely a must-see the next time you find yourself in Oregon. As I’m sure you’ll notice when you get there, the hills get their name from the bright reds, golds, yellows and even blacks of the stratified layers of soil. Although it may look just like a massive piece of artwork, the colors of the Painted Hills represent millions of years of history, making it an important archaeological feature. The hills are one of three components that make up Oregon’s famous John Day Fossil Beds, from which scientists have so far discovered a collection of over 40,000 fossils. As with much of the beautiful and ever-changing Pacific Northwest, the Painted Hills are also a great place for a photo-op – just keep in mind that the lighting there is best during the afternoon hours.

Although Crater Lake may be one of the most impressive geographical features in the country, I’m surprised by how many people I’ve talked to who know nothing about it. At about 1,943 feet, Crater Lake is the deepest lake in the United States, and it is the seventh deepest in the entire world. As Oregon’s sole national park, Crater Lake has a lot to be proud of.  With crystal clear water surrounded by nearly 2,000 feet high cliffs, two center islands, and an explosive volcanic history, there is plenty to see, do and explore in the park. Added bonus: If you’re looking for a breathtaking view that will inspire you to live more, ask that one person on a date, or even go after that dream job you’ve been eyeing, Crater Lake just might be the place for you.

Whether you find yourself in Oregon for an abundance of organic produce, some traditional Stumptown Coffee or even for some good ol’ college football rivalries, be sure to take your time to explore and find your own hidden treasures. From coastal beaches and sandy deserts to enchanted forests and snowy mountaintops, Oregon has just about everything to please every kind of traveler year round. Come find out why Oregon was the number one destination among people who moved from one state to another just last year!