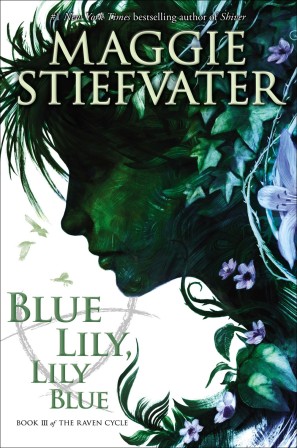 Blue Lily, Lily Blue  is the third book of four in Maggie Stiefvater’s The Raven Cycle series. This series snuck up on me a little bit. I didn’t know what I was getting myself into. It took me a while to warm up to the first book…but then it stuck with me. And then after the second book, I felt a little disappointed, like it was good but also superfluous to the grander story. But no. I reread it and my opinion changed entirely.

These books get under your skin. Blue and the Raven Boys are not just characters to me anymore, and Henrietta isn’t just a setting. Needless to say, I was looking forward to Blue Lily, Lily Blue. And for the first time, it didn’t take multiple reads or reflection to fully appreciate what I was reading. Others are calling it a bridge book, filler between setup and finale. And maybe it is, but for me it had just as much action and plot momentum as the other two books.

Of course, there’s not much I can say about that plot without spoiling, but the cave setup at the end of The Dream Thieves transitions into the main story of Blue Lily, Lily Blue, which involves Blue and the boys exploring the new Cabeswater cave as well as investigating some other potential linked cave systems with the dual purpose of potentially finding Blue’s mother, who disappeared underground with a mysterious note at the end of book 2, and continuing Gansey’s search for Glendower, the sleeping Welsh king of legend.

All the characters we know and love are back, and much to my delight there is more focus on Blue in this book – I missed her perspective a lot in The Dream Thieves and was happy to see more of her here. Ronan shifts to the background a bit, which I also appreciate. I know a lot of people love Ronan and I do think he’s a fascinating character with a lot of depth to explore, but I just don’t particularly love being in his head. I find him much better suited to bringing his unique brand of pessimism and ire to every situation when he is more of a side character. Another bonus is the character development of Adam – in The Dream Thieves he became kind of insufferable. In Blue Lily, Lily Blue, he is redeemed significantly.

This transformation is just one of many ways Stiefvater plays with reader’s emotions. She also provides more excruciating glimpses at the potentially doomed Blue/Gansey relationship, as well as tantalizing hints about the direction of the story overall and how everything ties together on a grander scale.

Stiefvater also introduces several new, fantastic side characters. Remember how in The Dream Thieves Stiefvater took The Gray Man, a character who would normally be painted as a villain, and made him entirely loveable? She cranks this up a notch in Blue Lily, Lily Blue  by introducing us to The Gray Man’s former boss, Greenmantle, and his fantastically horrible wife, Piper. They are both terrible people, but oh, they are terrible in the most entertaining way possible! We also meet a townie named Jesse Dittley who speaks in caps lock. I loved this man. There was hardly a single thing that came out of his mouth that did not make me giggle.

What really makes this series stand out to me is Stiefvater’s ability to create a very intricate, mysterious story with beautiful detail and mix it seamlessly with characters grounded in reality. The blunt dialogue, the quiet (and not-so-quiet) humor, and the relationships between the characters feel so real. It’s a really fantastic contrast with the ambiance and magic of the overarching story, and it’s a combination that makes these books feel like an experience.

If you want a taste of this fantastic book, check out the prologue online or view the book trailer below!