WHEN I LIVE MY LIFE OVER AGAIN (Image Credit: Starshadow, LLC. / Ali Goldstein)

The 14th installment of New York City’s Tribeca Film Festival kicks off on April 15, hosting a number of films and performances through its Spotlight, Midnight and Special Screening sections. Featuring narratives, documentaries and work-in-progress films from across the globe, the 2015 festival has a number of films that we can’t wait to see. Sifting through the heart-wrenching, historical and star-studded, we’ve narrowed it down to our top 5 picks. Check them out below!

1. In Anesthesia, a Columbia University professor is brutally mugged on an apartment doorstep. The film, written and directed by Tim Blake Nelson, traces the events preceding the attack that bring a group of individuals together. The film, sporting an impressive cast of Kristen Stewart, Sam Waterson, Glenn Close and Cory Stoll, is called a “haunting meditation of city life.”

2. Ashby, directed and written by Tony McNamara, follows Ed Wallis (Nat Wolff) as he tries to fit in with his new surroundings. Mickey Rourke is the titular Ashby, Ed’s neighbor and former CIA assassin, who he turns to for guidance. The film reunites Nat Wolff with Emma Roberts, who starred together in a 2014 Tribeca selection Palo Alto. The film also stars Sarah Silverman.

3. Tribeca offers an array of documentaries, one of which is DRUNK STONED BRILLIANT DEAD: The Story of the National Lampoon. Director and writer Douglas Tirola traces what began as an underground cultural movement and ended as a mainstream household brand, producing films such as Animal House and the National Lampoon’s Vacation series. The documentary features never-before-seen archival footage and in depth interviews with founders and fans. The film is co-written by Mark Monroe. 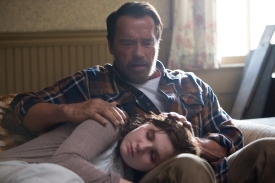 4. Arnold Schwarzenegger is back on the big screen, this time to fight a zombie epidemic in the film Maggie. Schwarzenegger stars as Wade, a small town farmer and family man, who fights against the odds to save his daughter Maggie (Abigail Breslin of Little Miss Sunshine and Zombieland) when she becomes infected by the virus. The highly-anticipated film is directed by Henry Hobson and written by John Scott 3.

5. When I Live My Life Over Again follows Jude (Amber Heard), a would-be singer-songwriter struggling to make her mark, as her father (Christopher Walken, who recently serenaded us in NBC’s silly yet delightful Peter Pan Live!) desperately charts his musical comeback. The dramedy is written and directed by Robert Edwards.

Day passes are available through the official Tribeca site. The Daily Quirk will see you there!