Back in October, I heard feminist media critic Anita Sarkeesian talk about what constitutes a strong female character, and it changed my life, literally, and forever changed the way I watch TV.

Sarkeesian created a web series called Feminist Frequency in which she looks at stereotypes and tropes that are often associated with women in pop culture. Usually, she talks about why these ways of simplifying women can be harmful to society as a whole. She also gives lectures at universities across the United States, which is how I met her.

At her lecture, Sarkeesian presented work she did for her thesis on female characters in mostly science fiction TV shows. She talked about what traits were valued in male characters (aggression, violence, no emotion) and how they differed from traits typically considered feminine (hysterical, innocence, helplessness). In an attempt to introduce strong female characters starting in the ‘80s, pop culture introduced the trope of the Woman Warrior, who more or less still glorifies the masculine traits but now in a female package. Examples of these characters could include Lara Croft (Tomb Raider), Starbuck (Battlestar Galactica), and Zoe (Firefly). 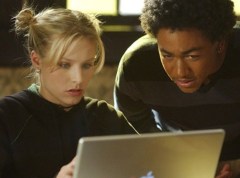 Sarkeesian noted that this view of gender hurts both women and men. Women are often only considered “strong” in so far as they act like men while men have to adhere to a specific idea of masculinity in order to still be considered men. Ideally, strong female characters (and male characters as well) would emphasize problem solving and teamwork over violence – such as Buffy Summers (Buffy the Vampire Slayer) and Veronica Mars (Veronica Mars).

Although I hadn’t ever considered myself a feminist, I knew that I agreed with Sarkeesian, and I could see problems in depictions of women on TV shows that I watched, including Community and Fringe. While this doesn’t hinder my enjoyment of the shows, it’s now something I analyze while watching, and I hope to help promote more balanced traits in TV characters of both genders in the future.

Sarkeesian has also spoken out against online harassment, including harassment she has received for her work on Feminist Frequency, and she doesn’t focus solely on TV but on several types of media, including advertising, books, TV shows, movies, and most recently, video games.

A few weeks ago, the first video in Sarkeesian’s ongoing series “Tropes vs Women in Video Games” went up on YouTube. The video looks at video games’ use of the damsel in distress trope including familiar faces such as Princess Peach and Zelda and why that’s a problematic view of women. The project, which was funded via Kickstarter, will look at several other stereotypes in later videos including “The Sexy Sidekick,” “The Sexy Villainess,” and “Unattractive Equals Evil.”

The series will feature at least twelve videos overall. The first video in the series as well as all future videos can be found on the Feminist Frequency YouTube page. You can also follow Feminist Frequency on Twitter, Facebook, or Tumblr for updates.